“The Art of the Divorce Announcement”

Consider this article from the January 12-13, 2019 Wall Street Journal.

The Art of the Divorce Announcement 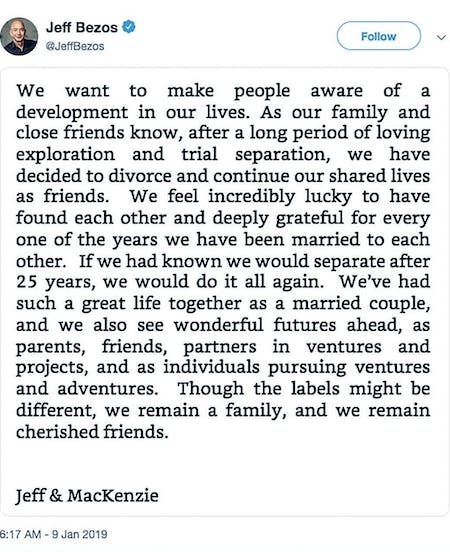 1‘We’ From the first word, this is a united front.

2‘Loving exploration’ joins “conscious uncoupling”—made famous by Gwyneth Paltrow in her 2014 breakup with Chris Martin—in the 21stcentury lexicon of Better Divorce. It’s not an ending —it’s an empowering life crossroads.

3‘friends’ The big message here: WE ARE NOT SUING EACH OTHER. Don’t worry, Amazon shareholders, customers and suppliers. The world’s most valuable company is not going to become a pawn in the world’s biggest divorce battle.

4‘ventures’ A lot of ventures to keep track of in this breakup. The soon-tobe ex-spouses say they will be “partners in ventures” and “individuals pursuing ventures.” (MacKenzie is about to be a giant economic force of her own.) But don’t worry, it will all be wonderful.

5‘remain’ Really, nothing is changing. Move along here.

6‘friends’ The third description of the couple as “friends.” Did we mention WE ARE NOT SUING EACH OTHER?

7‘Jeff & MacKenzie’ We’re regular folks like you. Just your friends, Jeff and MacKenzie! And even though we’re splitting, we’re still a team.

When Amazon CEO and world’s richest man Jeff Bezos and his wife, MacKenzie, announced their divorce earlier this week, the pair took to Twitter. “We want to make people aware of a development in our lives. As our family and close friends know, after a long period of loving exploration and trial separation, we have decided to divorce and continue our shared lives as friends,” the statement began.

Welcome to divorce in the age of social media.

In a world where personal news can spread to millions in minutes, it’s no longer enough for divorcing couples to sit their kids, family members or close friends down and explain their decision. Increasingly, couples, or individuals, are issuing divorce announcements on social media. The purpose is to tell many people at once—and to jump out ahead of gossip and speculation. For CEOs, it’s also a question of reassuring shareholders, employees, colleagues and customers that they won’t be experiencing turbulence.

“With an announcement, you are framing the narrative,” says Rachel Zamore, a marriage and family therapist in Brattleboro, Vt., who works with couples considering divorce.

“You are saying: ‘This is the tone and this is the story. You don’t have to fill in the blanks.’” The online divorce announcement was pioneered by celebrities. In 2012, tech entrepreneur Elon Musk announced that he was splitting from his wife, British actress Talulah Riley, by tweeting to her: “It was an amazing four years. I will love you forever. You will make someone very happy one day.” Actress Gwyneth Paltrow and musician Chris Martin famously announced they were going to “consciously uncouple”— a term that immediately entered the lexicon—in 2014, on Ms.

Paltrow’s lifestyle website, Goop. This past March, rapper Logic announced his divorce from singer Jessica Andrea on Twitter, explaining: “We would like to shut down the speculation and potential internet clickbait as to the ‘why’ in how this happened, or the ‘who might have done what to whom.’” You don’t have to be famous to issue a statement. In April 2017, Carolyn Krieger, the owner of a public relations agency in Farmington Hills, Mich., wanted to tell people that her divorce was final, after 28 years of marriage. She sat down in her home office and composed a Facebook post. “I have so many personal and professional connections that I knew there would be no way that I would be able to contact them all,” says Ms. Krieger.

In the post, Ms. Krieger said she and her husband were divorcing. She acknowledged the pain, but struck a positive note, writing: “Though our journey together as husband and wife has ended, along that journey we brought two amazing daughters into this world who are my life’s biggest blessings. As hard and heart breaking as this road to end our marriage has been, I have immense gratitude for the experiences we have shared because they have all helped me to grow, change and evolve into the person I am today.” Ms. Krieger then thanked the people who had supported her during the divorce process, including several by name.

And she ended by saying: “Please know that I am…and will be…OK.”

She’s glad she wrote it. “The feedback was beyond beautiful, supportive, heartwarming and loving,” she says. “From a business perspective, my clients and media contacts know me as an honest, authentic, positive person, and those who read this post saw that I remained true to the person I am. And though our daughters are adults, from a co-parenting perspective, my daughters saw that their mom honored our family, even though our family unit would take on new form.”

The Bezoses’ divorce announcement provides a road map for prominent couples to publicly announce their split, experts say. Written as a joint statement, it mentions the word divorce just once and explains that this comes after “a long period of loving exploration.” The brief statement presents a united front and seems designed to reassure everyone— children, family and friends, shareholders, employees, charity partners, the general public—that the split is amicable and that the only thing changing is the couple’s marital status.

What’s the best way to craft a social media divorce statement? First, wait until the decision to split is final.

“I’ve seen couples reconcile in the 11th hour, and if you’ve announced it already things are a bit messy,” says Kim Leatherdale, a marriage therapist in Allenhurst, N.J. If you are the head of a company, you don’t want to signal uncertainty, which can upset shareholders or employees.

And regardless of who you are, you’ll want to avoid attracting unsolicited opinions and advice.

Announce publicly as soon as you’ve told your children, family and close friends. The point is to own the narrative, so get your message out ahead of gossip and speculation. And make your statement succinct. “People only have so much attention span,” says Peter Walzer, a divorce attorney in Los Angeles and president of the American Academy of Matrimonial Lawyers. “The more you give them, the more they have to analyze,” he says.

Strike a positive tone—remember that your children and family will be reading it—and present a united front, Mr. Walzer says. “The message should be ‘we, we, we,’ to avoid the impression that you are going to court in a battle over custody of the children or ownership or control of the business,” he says.

A joint statement tells people they don’t have to choose sides and that you won’t become distracted by your divorce. “It’s good for the family and good for the company,” Mr. Walzer says. Leave out the blame. It will harm the children and make you look petty. Plus, you can’t retract it once you’ve put it out there. “A respectful tone is reassuring,” says Ms.

Zamore, the marriage and family therapist. It says: “We are changing the logistics of our lives and definition of our relationship. But we’ve got this. We are all OK.”

The Bezoses’ statement includes a remarkable amount of loving language.

They say they envision “wonderful futures ahead” for themselves co-parenting and working together in “ventures and projects.”

They end by stating that they “remain cherished friends.”

This language may be intentionally aspirational, Ms. Zamore says.

“It’s what they are reaching for.” And it can be empowering. “If the public narrative is we are going to act like adults, we are going to be kind and compassionate and respectful and even still connected, that is a beautiful intention,” she says. “You may even have a better divorce for setting this tone.”

The Bezoses’ did not ask for privacy, or make a request of readers, but experts say it is OK to do so. Ms. Leatherdale, the marriage therapist in New Jersey, suggests: “What went on was between us, so we appreciate no questions about the reasons for this divorce.” “Please respect our children’s feelings and give them and us space in this difficult time.” “We realize everyone has their opinions about divorce in general and maybe ours specifically, please keep those to yourself as this was our decision.” “There are no sides to take in this, so please don’t do so.”

Finally, don’t lie. If you no longer love your ex, don’t say: “Although we still love each other we need to move on.” It’s enough to state that it just didn’t work out. “Remember, everyone who sees it on social media will be dissecting it, so be careful,” Ms. Leatherdale says.

« Back to all news